How sad this morning to learn that Glen o’ Dee Hospital, which I wrote about last year, was completely destroyed by fire overnight. Here’s the relevant part of my original post from July 2015. I’m glad we saw it in all its neglected, fascinating glory.

A complete contrast, this one, but another unexpected discovery. I had come across the name of this former tuberculosis sanatorium during the course of some research, and when we saw the signpost we decided to take a quick look. I’m not sure what we expected to find, but my photos definitely don’t do this unusual building justice. 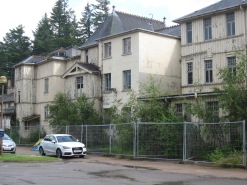 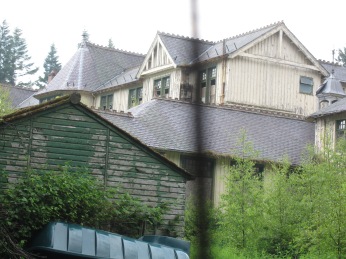 You can see an image of how it looked originally here, and some photos of the abandoned interior here. Resting among the pine trees on the edge of Banchory, the sanatorium was built in 1899-1900, and modelled on the pioneering sanatorium built in Nordrach in Germany. It was originally known as Nordrach-on-Dee, and was intended to provide fresh air, treatment and research in the battle against the scourge of tuberculosis. As treatments changed and the disease became less common, the sanatorium was no longer needed. Since then the building has had a spell as a luxury hotel, and then was used once more as a sanatorium during the Second World War, before becoming a convalescent hospital. It finally closed in 1998. This stunning building is Grade A listed so can’t be demolished, but instead is crumbling slowly into total decay. Apparently it featured unsuccessfully in the 2003 TV series Restoration, but it’s a tragic loss of an unusual and fascinating building.