Norman Macleod was one of the main characters in my book Faith in a Crisis. Now the house he lived in, which was part of his story, is on the market. The lady who lived there  was a friend of my parents and I remember visiting as a child, but the shiver down the spine comes when I think of Norman and Julia descending those stairs, walking through those rooms …. and leaving the house with their ‘young and helpless family’ when they were evicted by the factor in 1843.

Extract from Faith in a Crisis (Islands Book Trust, 2012):

Norman, by quitting his church at Trumisgarry, was no longer entitled to his house. He wrote to Lord Macdonald, offering to pay the same rent as any other and observing, ‘I trust your Lordship does not really intend to drive me with my young and helpless family out of my present dwelling house.’ The factor, Seumas Ruadh of Balranald, himself an Established Church elder, replied in these terms:

It is not [his Lordship’s] intention either to grant you a site or to give you any lands …. I am sorry for you and your family, you will be much put about, but you have brought it all on yourself. …. Kind compliments to Mrs McLeod.

Within a few years, of course, many of Norman’s congregation would also have been evicted from their homes and land, with fewer resources to survive and far more drastic consequences.

Seumas Ruadh was the father of Jessie of Balranald, whose story I told here. It was recently fictionalised  in the novel The False Men by Mhairead Macleod.

These stories just keep coming back.

There’s a ship called the Priscilla aground in the Pentland Firth at the moment – see for example this from the BBC News website. 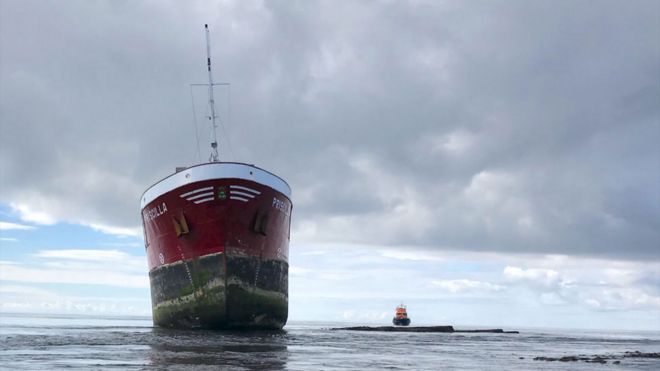 My dad was a great storyteller, particularly when it came to both sides of his remarkable family, the Morrisons of North Uist and the Keiths of Thurso. The news item about the Priscilla reminded me of one of his stories which he heard as a boy from his own grandfather, Peter Keith (1847-1936). It’s the story of a shipwreck in the Pentland Firth which wasn’t quite what it seemed ….

As a lawyer and notary public in Thurso, one of Peter Keith’s more sombre tasks was recording the circumstances of shipwrecks on the treacherous Caithness coast. On the morning after a stormy night the captain of a small sailing vessel arrived in his office, looking for a notary public who would record the sorrowful events of the night before. He told how he had tried to take refuge in the Scrabster Roads area just outside Scrabster Harbour, but his ship went down, drowning both the mate and the ship’s boy and leaving him the sole survivor.  He narrated in detail the dramatic circumstances of the shipwreck and Peter Keith made notes, then told him to come back to sign the declaration once he’d had time to write it up fully.

So far, nothing unusual. But when a second man arrived in his office, claiming to be the sole survivor of a shipwreck in Scrabster Roads, Peter Keith began to wonder. Always canny, he said nothing but let the man tell his story. This time it was the ship’s mate, claiming that both the captain and the boy had drowned, but telling a quite different tale of how the vessel came to be lost. So Peter Keith once more made notes, giving nothing away, and in time both men signed their notarial protests.

It was about a fortnight later that the true story emerged, when the twice-drowned ship’s boy turned up alive and well. The ship had indeed taken refuge near Scrabster, but once she was safely tied up and the men presumably resting, both the captain and the mate independently decided to leave the ship – completely against their duty and without the other knowing. They went ashore and spent the evening in the thick, noisy warmth of (separate) pubs.  But while they were enjoying a few stolen hours ashore of good company and fast flowing drink, sheltered from the howling winds outside, the cable holding the ship secure parted, and she began to drift out to sea once more.

Eventually the captain and the mate must each have made his way back to harbour. Their ship was gone.  It was a wild night, and there seemed to be only one explanation. Each believing himself to be the only survivor, he took an invented story to the notary public to save his own skin.

And meanwhile there’s a ship adrift on that wild sea, with an inexperienced boy the only person on board.

There was a powerful west wind that night and it was blowing the ship right through the Pentland  Firth. All the poor ship’s boy knew about navigating the Firth was that ‘you sail by Dunnet Head and by Cantick Head in Orkney, and you keep the Skerry lights open’. And it may have been by skill and it may have been by chance, but he brought that ship through the Pentland Firth without disaster, and was blown right out into the North Sea. Here she was picked up by a Norwegian ship and taken in tow, and the ship’s boy eventually got back to shore.

That’s where the story ends, although of course like all good stories it leaves me wanting more. Who was the ship’s boy and what happened to him? What a story he had to tell for the rest of his life! What about the captain and the mate, what happened to them?

There just might be some answers. The whole story was recorded in Peter Keith’s Protocol Book. There’s a collection of Keith Family Papers in Caithness Archives which I consulted when researching War Classics, the story of Peter Keith’s daughter Christina’s time with the troops in World War One.  Among those papers is the Second Protocol Book of Peter Keith. I have no dates and no names for these events, but wouldn’t it be wonderful if the story of the shipwreck which never was appeared in some form among its pages!