The names of sixteen men from Davidson’s Mains in Edinburgh who were killed in the First World War are carved on the church war memorial which, unusually, is also the communion table. 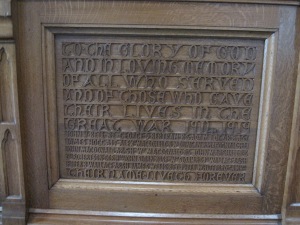 A few years ago I tried to find out something about the lives behind these names, and this is part of an article I wrote for the church magazine about them.

To the glory of God and in loving memory of all who served and of those who gave their lives in the Great War 1914-1919.

John Wilson Bell was 23 when he died in February 1917. He was a 2nd lieutenant in the Royal Engineers and is the only one of the 16 men to be buried in Edinburgh, in Comely Bank cemetery. His parents lived at Hillview Terrace.

George Dawson Bertram grew up at Dowie’s Mill. He was a Private in the 9th Battalion of the Royal Scots. He was killed in France in 1917 aged 31 and is buried in Etaples Military Cemetery.

Adam Edgar was a local family man, living in Davidson’s Mains with his wife and small daughters. He was a motor driver, and so served as a driver with the Royal Army Service Corps. He died in Germany in March 1919 aged 33, and is buried in Cologne Southern Cemetery.

James Hogg had left Edinburgh by the time war broke out. His parents died when he was young, and he lived with his older brother Charles. At some point James emigrated to Australia, and he was working as a leather worker in South Yarra, Victoria when he enlisted. His brother Charles still lived in Mary Cottage in Main Street, and became an elder in the church. In February 1919 James was on leave in the UK. He returned to France, and just weeks later was killed accidentally, aged 31. Although part of the Australian Forces, he is remembered here in the church of his childhood. He is buried in Duisans British Cemetery, Etrun. Some years later Charles also emigrated to Australia.

Alexander, Duncan and John MacDonald
There are three sets of brothers commemorated on the communion table. Alexander and Christina MacDonald tragically lost three of their sons. They had come from Skye to Edinburgh, where Alexander worked as a railway plate fitter, and they brought up their family in Corbiehill Road. John, who was in the Argyll and Sutherland Highlanders, died in April 1917 aged 25,  and is commemorated on the Arras Memorial. Alexander, of the Black Watch, died on 19 July 1918 aged 23. Like his brother he has no known grave and is commemorated on the Ploegsteert Memorial in Belgium. And then, just 36 days later, a third son Duncan was killed, aged just 21. He had been in the Highland Light Infantry, and is buried at Bac-de-Sud British Cemetery, Bailleuval, France.

William MacDonald, Royal Scots. I am not sure of his identity.

John Marshall, a baker who lived with his wife and children in Ivylea, Davidson’s Mains, is one of two men commemorated on the table who were part of the famous ‘Hearts Company’, or ‘McCrae’s Battalion’. This 16th Battalion of the Royal Scots included thirteen Hearts footballers and many other local young men, often Hearts supporters. They were at the front of the assault on the first day of the Battle of the Somme, 1 July 1916, and suffered huge losses. John Marshall died that day, aged 34. His name is remembered along with thousands of others on the Thiepval Memorial, the memorial to the missing of the Somme. John’s father William was an elder who played a significant part in the life of the church over many decades.

George Robertson, whose parents lived in Main Street, served with the Gordon Highlanders. He was killed at Ypres in April 1916, and is commemorated on the Menin Gate Memorial.

Jack and William Sloan’s parents were John and Elizabeth Sloan of Craigcrook Terrace. Their father was an elder in the church. The Kirk Session records of June 1915 reveal that Pte William Sloan, son of members of this congregation and serving in the Royal Scots, has been admitted to the Full Communion of the Presbyterian Church by one of the Presbyterian Chaplains to His Majesty’s Forces. William was another who had joined up with the ‘Hearts Company’. Like John Marshall, he was killed in the carnage of the Somme on 1 July 1916, aged 22, and he is commemorated on the same memorial. His younger brother Jack was 2nd Lieutenant with the Kings Own Scottish Borderers, and died in France on 23 July 1918, aged 21. He is buried in Buzancy Military Cemetery.

James and Peter Wallace are the third set of brothers to be remembered on our communion table. They both served with the Argyll and Sutherland Highlanders. James had married and was living in West Kilbride when he enlisted. He died in August 1916, aged 25, and is buried at Bois Guillame Communal Cemetery, France. His younger brother Peter was just 20 when he was killed at the Battle of Loos in September 1915 – the youngest of the sixteen men. He is commemorated on the Loos Memorial. Their family home was in Main Street, Davidson’s Mains.

James Wells of the Royal Flying Corps may be James Ritchie Wells, who died on 17 November 1917 aged 27, and whose parents lived in Glasgow. He is buried Glasgow. I have not found a link with Davidson’s Mains.

Peter Whiteford, the final name on the communion table, had the closest association with the church as his father was the beadle, and his family lived in the Cottage. He was a sergeant in the Cameron Highlanders, and was killed in action in January 1915, aged 27. He is commemorated on Le Touret Memorial in France.

Remembrance is about much more than one conflict 100 years ago, but whether in the distant past or more modern times it’s surely more meaningful when we honour not just a list of names but real people, with homes and lives and families who grieve. We will remember them.

It’s two years now since I first became fascinated by the memoir of Christina Keith, my great-aunt from Thurso. My father – her nephew – has owned this manuscript for many years and I knew of its existence, but had never actually read it. Now it’s to be published.

Christina was an academic who spent much of her working life as a lecturer in Classics at St Hilda’s College, Oxford. Born in 1889, she was part of the generation which pioneered higher education for women, and which would be most affected by the First World War. These two themes, women’s education and war, intertwine in Christina’s story.

Towards the end of the First World War – although it’s worth remembering that when she signed up she didn’t know it was ‘towards the end’ – Christina travelled to France to take part in the army’s education scheme. She taught soldiers of all backgrounds, immersed herself in army life, and was one of the first women to travel across the devastated battlefields once the guns had fallen silent. She has left a fascinating memoir of her time in France which offers a truly fresh perspective on life on the Western Front as the conflict drew to a close.

I spent a wonderful few months in 2012 exploring Christina’s story from her early years as the eldest child in a large Caithness family, through her choice to pursue an academic career in male-dominated subjects, and on to her time in France.  The resulting book consists of my narrative of Christina’s story, her own memoir in full with explanatory notes, and some letters written by her brother Barrogill Keith from the front line. It will be published in March 2014 by The History Press, and you can preorder from Amazon or Waterstones.

Lots more on this to follow over the next few months!