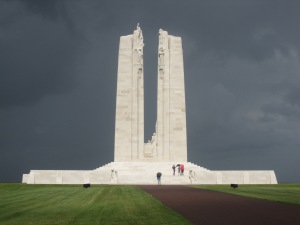 Over 100,000 Canadian First World War service records have just been made available online. It was a thrill to discover that the Attestation Paper for Daniel Gordon Campbell is among them.

I discovered something of Gordon’s story as I carried out research for War Classics. When Christina visited Vimy Ridge in March 1919, she wrote:

My eyes had turned to the horizon again, to the heights that once were St Eloi. Someone I knew lay there, who had been a Canadian, and it was too far for me to go. I could only see the Ridge where he had been killed, and not the place where he lay.

Putting together clues from Christina’s narrative with information preserved elsewhere in the family, I was able to confirm that the ‘Canadian’ of whom she was thinking was Daniel Gordon Campbell. He had grown up near the Keith family in Caithness, attending the Miller Institute and Edinburgh University, and by the time war broke out was a lawyer living in Canada, and was engaged to be married to Louise, Christina’s sister. Louise never recovered from his death, and kept scrapbooks filled with newspaper cuttings about the Canadian action at Vimy, letters of sympathy from friends, and information about his final resting place.

Gordon’s attestation paper, which you can see here, includes a physical description. He had dark brown hair, dark complexion and brown eyes. Most strikingly he was 6 ft 6 inches tall, which sheds new light on the fact that he represented Scotland at the high jump!

From Louise’s scrapbook, photo of memorial to Canadian soldiers who fell at Vimy

Every fresh little detail makes these men real people. Gordon left no children to remember him, and I haven’t yet explored to see if there are any other family members who might have kept his memory alive. But thanks to Louise’s scrapbooks and Christina’s time in France, he hasn’t been forgotten.